You are here: Home / Uncategorized / Treasures of the sea 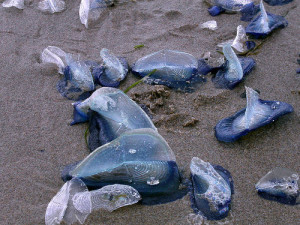 Found on the beach near Rockaway, Oregon, yesterday an apparent alien invasion — a little blue sailboat with a gossamer sail, beached on the sand by the thousands.

They looked like toys, their bodies so blue that they seemed like plastic and their sails clear as cellophane, but the bodies were both squishy and resilient and the sail so intricately patterned that it couldn’t have been mass produced.

Upon coming home I’ve learned that the velella jellyfish are creatures of the great ocean, commonly called “sailor by the wind,” and that their arrival on the beach is a rarity, not unknown but uncommon, because they ordinarily keep their sails oriented northwest to southeast, and it’s a malicious turn of the wind that brings them to shore for the wonder and appreciation of the landborne.

They’ll be on the beach only for a couple of days before they decompose and disappear into the sand.

“Most people don’t get to see them. Timing is everything,” says Alan Rammer of the Washington Dept. of Fish and Wildlife.

Rammer says that the arrival of the creatures signals the arrival of other treasures of the deep — Japanese glass net floats and other things. But the sight of the little fairy creatures marking the wave lines along the beach is a treasure in itself.