You are here: Home / Archives for Neil Gaiman 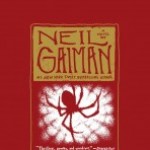 Neil Gaiman is a mystical portal where folk stories and mythology come pouring into our present literature. Everything from Norse (and other) mythologies (American Gods) to the land of nightmares (Coraline) flows through his rich imagination. In Anansi Boys he goes to the African spider-trickster for his source and brings him into a dysfunctional American and British family. "Fat" Charlie (he's not really fat, just soft around the edges, really) is living a fairly nice life in England, far … END_OF_DOCUMENT_TOKEN_TO_BE_REPLACED