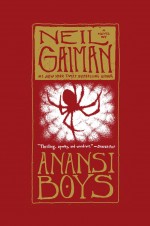 Neil Gaiman is a mystical portal where folk stories and mythology come pouring into our present literature.

Everything from Norse (and other) mythologies (American Gods

) to the land of nightmares (Coraline

) flows through his rich imagination. In Anansi Boys

he goes to the African spider-trickster for his source and brings him into a dysfunctional American and British family.

“Fat” Charlie (he’s not really fat, just soft around the edges, really) is living a fairly nice life in England, far away from his embarrassing father and the crazy old ladies who formed his community, when his father commits the further faux pas of dying. That drags him across the ocean to the funeral, where he learns that on top of everything else his father — elegant, debonaire, charming, talented, and oh-so-popular — did wrong, he somehow gave Fat Charlie a brother that he, Fat Charlie, didn’t know about.

Well, of course, it’s Neil Gaiman, so you can expect ann interdimensional romp through magic and mythology, and I don’t want to spoil it for you.

But it’s also Neil Gaiman in this way: It’s not just about the interdimensional romp. It’s also about love and family, loyalty and being who you are, about the tension between conventional morality and the crazy antics of the gods. And about the role of the Trickster in every mythological system.