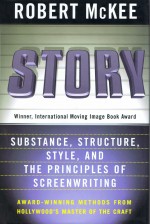 It’s probably the single most useful book I’ve ever bought on large-scale writing projects. Robert McKee’s Story: Style, Structure, Substance, and the Principles of Screenwriting is written for screen-writers, but it deals with the higher structural issues that figure in films, plays and novels — the only difference is the mode of presentation.

He starts off by reminding us that the motion picture industry needs well-crafted stories and that writing a good story is the best way to get it produced. It’s an encouraging thought — that polishing my skills is the way to make forward motion. It’s something I control, unlike whether I have relatives in publishing.

I wonder how much the market parallels between screen plays and novels, since there is apparently an insatiable desire for movies, but not necessarily for books.

He does a great job of defining terms that I’ve run across in other contexts. He may use different words for them, but the concepts are much clearer than they’ve been before.

He gives a long list of genre definitions, along with subgenres and metagenres, and advocates that writers write what they enjoy and believe in, keeping in mind that an art film with a small audience will need a smaller budget in order to get produced.

He categorizes various plot forms in terms of inner versus outer conflict or whether the artists simply violates canons for the sake of violating canons. He offers sensible advice about learning the canons before violating them and that a writer need not violate canons in order to produce artistically engaging work.

He draws a distinction between characterization and character. Characterization is what a character does to reveal himself–mannerisms, speech and so forth. Character is what comes out under the pressure of conflict. The more compelling the conflict, the deeper the layer will be revealed. A well-rounded character will reveal aspects of himself under pressure that put the lie to the surface he presented by characterization.

All this, and I’m just a quarter of the way through it. I thought it was an expensive book, but it’s one of the best writing-education purchases I’ve ever made.