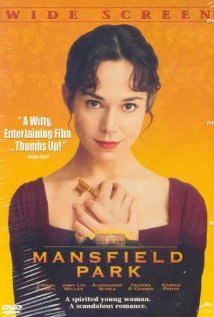 I recently watched the Mansfield Park movie, made in 1999. As standalone entertainment, it was OK: entertaining and emotionally moving with a dollop of social consciousness.

But it had been a long time since I had read the book by Jane Austen, and there were a few things that surprised me about Austen. A hardness, a coarseness, that fit our century more than hers.

is the story of a quiet, shy, and sensitive young girl named Fanny, raised above the the poverty she was born in to grow up in the home of a wealthy uncle with his two spoiled daughters and his grasping, social-climbing sister-in-law.

Spoiler alert: She falls in love with her cousin, the uncle’s second son who is set to become a clergyman. A rakish brother and sister move into the neighborhood and stir things up. And Fanny must hold to her moral compass despite every impulse to marry the rakish young man when everyone else tells her it’s the right thing to do. Against all odds and external impulses, she rejects  the rakish young man and hangs on to her love for her cousin.

The triumph demands a level of inner strength that is a huge character leap for her.

In the movie, Fanny is spunky. A series of vignettes show her growing up expressing her opinions on English history — beginning from the time when she doesn’t know anything.

In the movie, her uncle is the most corrupt person in the story. His older son (who is a rake who repents in the book), is a sensitive and wounded young man, disgusted by his uncle’s actions with his slaves in Antigua.

In the movie, Fanny is not steady with her decision not to marry the rakish neighbor. She even accepts him and then the next day changes her mind. Oh, well. Never mind.

My friend Katherine Hyde wrote recently that she doesn’t object to the changes that movies have to make to get good books to the screen, as long as they don’t violate the sense of the story. I agree.

Mansfield Park, the movie, violates the sense of the story.

The 1995 Clueless, was based on the Austen novel Emma

. The movie was funny, set in Beverly Hills, and very faithful to the original sense of the story, without ever claiming to be Emma.

Austen spent her writing career exploring the options of women in her time and place. She wrote them spunky and she wrote them retiring. It’s no wonder that we best relate to Elizabeth Bennett

and Emma from where we stand now. Those heroines are most like us.

But Fanny she chose to write as retiring. She points out that Fanny’s younger sister, who comes to live with the family after Fanny gets married and leaves, fits in better, because she’s more spirited. There’s a meaning in the choices Austen made for the story, and the movie disposes of every one.

Maybe Mansfield Park is harder to put on screen. I get that. So much happens in her head and in letters that it would take Bergman to put it on film. So be it.

A more honest approach would be to take that movie, change the name and the names of all the characters and otherwise leave the script exactly as it was. It would be an entertaining costumer with a dollop of social consciousness.

Smart viewers would observe that it’s loosely based on Mansfield Park, but no one would get the false idea that they know the story of Mansfield Park from the movie. It would not be vile.

A good adaptation gives the viewer a taste of the story. (An excellent one draws the viewer to read the book.)

The Mansfield Park movie is an innoculation against the book. And that’s a loss for anyone who sees the movie.