You are here: Home / The Craft of Writing / Log’s Eye View 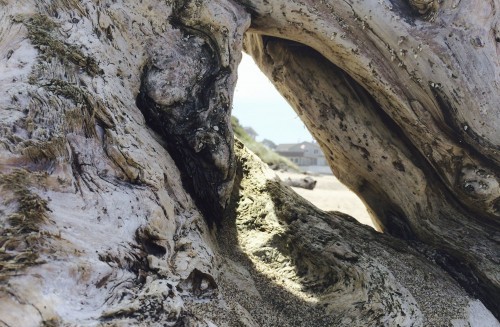 A week at the beach has been a good time for learning to create a zone for writing. In the psychological fantasy I’m working on, I find that the sound track is the David Lynch station on Pandora.

Why David Lynch? What attracted me most to Twin Peaks was not the story, which was a series of loosely related events that didn’t build in any direction. What gave the thin events texture and richness — what continued to affect me after the credits — was the soundtrack.

Exploring the sources of that music brought me to music by David Lynch himself. Minor-keyed and feeling just a jolt out of beat and musically askew, it’s exactly the mood I was looking for for Very Much Reality.

I took a walk on the beach and found that the soundtrack affected my photography, too. Even a beached log seems a little menacing with the right music in the background.