You are here: Home / Uncategorized / Icons shine at Orthodox Writers Week at the Beach 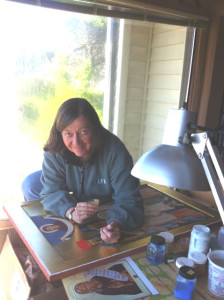 Not everyone at Orthodox Writers Week at the Beach this year worked in paper or pixels.

Orthodox iconographer Heather MacKean’s project took the form of egg tempera paint on a wooden board.

The icon, Saints of North America, features eight standing saints from North American Orthodox history, as well as the Theotokos, looking down from above.

She was putting finishing touches on the icon before sending it on its way to a church in Victoria, British Columbia.

Heather has created icons for churches across the United States, including St. Nicholas Orthodox Church in Portland. She was featured in an OPB Art Beat. Her current project is the dome and walls of a Orthodox Church of the Annunciation in Santa Maria, California.

Heather likes working in the sun porch, because the light is so good, and the view inspiring.

Orthodox Writers Week at the Beach (OWWB) is an annual gathering of writers (you don’t have to be Orthodox; you just have to put up with us for a week) at the historic Colonyhouse in Rockaway Beach, Oregon. You can sign up to get updates about next year’s OWWB.