You are here: Home / Uncategorized / How novels get started 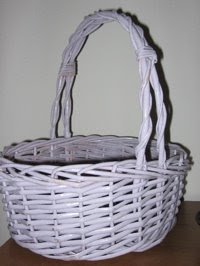 Fr. George gave me your basket! Not quite sure why he was so desperate to unload it, but you drove away just as I came looking for you. I can bring it next Sunday, or you can swing by sometime to pick it up.

Wouldn’t this be a great prelude to an inciting event?? Priest randomly hands off something that must be delivered to someone else…

Inciting incident: Priest hands off basket with instructions to pass it on to another parishioner. It seems like a simple thing until:

SF farce: Alien comes to earth in basket-shaped spaceship and threatens to destroy the earth unless basket, which represents their god, is released to them.

Comedy: Basket turns out to be a valuable gift to the parish that the priest has mistaken for a different, similar, and not valuable basket.

Romantic comedy: Person to whom the basket must go turns out to be the story’s love interest, and deliverer feels that he must pretend to be Orthodox in order to persuade recipient to go out with him.

Suspense: A third party stalks parishioner 1, looking for an opportunity to take the basket

Military thriller: the launch codes are cached in the handle of the basket. Navy SEALs are dispatched to retrieve it, but Spetznatz wants it too…

Cozy mystery: the basket disappears during the potluck

Chick lit: the Crones find money stashed inside and take it on a road trip

Cozy mystery 2: the cats sense something far more suspicious about the basket than the fur of Mocha and Sadie

Techno-thriller: the basket is equipped with state-of-the-art surveillance equipment to spy on parishioner 2. But while it is in parishioner 1’s hands, it broadcasts her evil plot to slip mind-controlling drugs into the prosphora.

Clancy: Meanwhile, in Moscow, a babushka gives an identical basket to Patriarch Alexei. Her KGB son finds her dead the next morning. At the same time, an Iranian baker receives a midnight visit.

Koontz: Parishioner 1 hands it off to the wrong person. Now everyone wants her dead.

Evangelical: Parishioner 2 is angry with Parishioner 1 for accepting the basket. Can they both see their wrongdoing and find strength to give the basket to the local soup kitchen?

Have we created a monster yet?