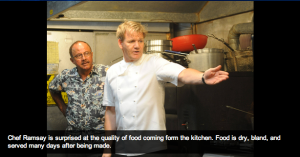 streaming on Netflix. I love the drama, the high stakes, the storytelling, and the effect it has on my own cooking (taking me from “whatever” to “that might be good”).

One evening as I was cooking dinner and watching Chef Gordon Ramsay close yet another restaurant for unsanitary conditions, I heard echoes of a story structure I learned long, long ago: sin, suffer, and repent.

“Sin, suffer, and repent” was the structure of the “true confessions” stories that were a staple of teen-aged girls’ reading when I was a kid. I was an aspiring writer, and that was an active market.

There must have been dozens of those magazines at the time, written in first person as if they were the true experiences of wayward girls, but they were fiction, written by freelancers and staff to a tight formula, with a particular slant for each magazine. I guess those magazines are still around, still buying stories, but I don’t know who reads them (maybe the same people who read them when I was a kid).

The Confessions of St. Augustine

is credited as being first in the genre, as well as the first Western autobiography. For me, the last confession, a 180-degree turn from St. Augustine, was Go Ask Alice

. One difference between the two is that St. Augustine’s confession ends with redemption; Alice’s ends with (spoiler alert) suicide.

Chef Ramsay’s tales come down on the Christian end of that spectrum. I’m not talking about spiritual redemption — this is a show about restaurants, after all — but redemption within the context of the people’s relationship to their business, family, and society.

Chef Ramsay comes to a restaurant like a foul-mouthed angel (just about every sentence from most of the parties has a word or two smudged out). It’s hard to come “unawares,” as the scriptural angels did, when you’re followed (and probably preceded) by a retinue of video cameras and staff, but Chef Ramsay comes in, greets a friendly face, and his presence begins stirring up animosity in the protagonist, usually the restaurant’s owner.

In fiction terms, Chef Ramsay is a catalyst, one who doesn’t change, but who brings chaos and forces change in the other actors in the story.

He is served an abysmal lunch and offends the protagonist by saying so. Then there’s a dinner service, when anything can happen — he closes down the restaurant for sanitary issues or the chef walks out or the service is so slow that Chef Ramsay sends everybody home.

At some point in most episodes, he inspects the kitchen and finds something shocking — a roach infestation in one restaurant, several years’ worth of frozen food in another. He confronts the people with the depth of their sin and calls them to repent — to change their ways and move forward.

Over the next few days, he brings hope and healing to the restaurant. A new menu, a new business plan, often an overnight redesign of the dining room. There are tears of joy, and at some point in here, the protagonist proclaims that his life has been turned around. He has seen his error and is ready to make the changes Chef Ramsay recommends.

Then there is a dinner service with the changes in force. A full restaurant with the new food, new concept, new attitude. Something always goes wrong. Change is hard, and success can be overwhelming. Will the protagonist fall back into his old ways? The outcome is uncertain, and the stakes are high.

Then triumph. The dinner is a success. The food critic is happy; the customers love the food; relationships are healed. Sometimes, the unrepentant secondary character is cast out. Within the context of the story, the protagonist has new life.

Chef Ramsay walks away, pleased with the result but raising the question of whether the changes will hold.

There are variations, but that’s the pattern. I don’t pretend to know Chef Ramsay’s religious belief, but he’s got enough of a religious background to pray before a meal now and then, that the Lord won’t let him be poisoned — a reasonable concern in some of these restaurants.

I’m not accusing Chef Ramsay or his producers of being evangelists for anything beyond good restaurant management. But with or without knowing it, they work within the boundaries of a deep and resonant archetype, and it’s no accident that audiences respond.