You are here: Home / Archives for Jason Bannon 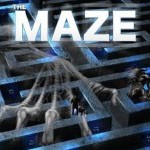 In The Maze, a man’s near-death experience throws him into a psychological-spiritual-symbolic labyrinth that calls into question everything he’s been and whether it’s worth it to him to be something different. Jamie Burroughs is a man whose moral needle points to the yellow, “pretty good” region of the dial. He’s never killed anyone, he would argue, or robbed a bank, and the things he’s done wrong don’t hurt anybody. Until a beautiful former girlfriend shows up, presenting a new vision for how … END_OF_DOCUMENT_TOKEN_TO_BE_REPLACED