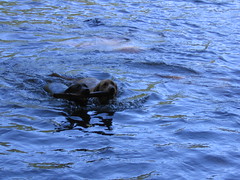 I’ve been working to learn to speak dog most of my life. Most of my dogs have done better at learning my language than I have at learning theirs, but over time, I’ve gotten better at it.

For instance, if you want to tell a dog that you’re friendly, start at a high pitch and work down to a low pitch. Words are optional. Babytalk is fine, such as “Oh, what a good puppy.” For added emphasis, wave your arm behind your back as if it’s a tail. Dogs don’t see well, and they don’t make distinctions between arms and tails. People, unfortunately, do see well, and they are likely to think the tail thing is a bit of overkill, if not utterly mad. Proceed at your own risk. Also, of course, if you’ve violated some other dog protocol, such as crossing into restricted territory or seeming to threaten its pack, making friendly noises may not help. It can’t hurt either.

If you want to speak warning, on the other hand, a staccato, “Bark! Bark! Bark” is the standard doggie alarm. If your dog says that to you, it’s something the dog considers worth noting. (It may be a cat moseying down the street, but the dog considers that noteworthy.)

Or if it’s time for sleep, a long breath expelled through the nose is a signal that it’s time to calm down.

Now ABC News gives us another one. Researchers are calling it a “laugh,” which is probably as good a name as any. Just for an experiment, I did a loud, long pant, as described in the article, to Sadie and Mocha, my dog teachers, who were sleeping nearby. Sadie got up and brought me a tug toy. Mocha got up and corrected my pronunciation — it should be done with a rounded mouth, as if you’ve taken a large bite of a too-hot roasted marshmallow and are trying to cool it off before it burns your mouth. She congratulated me on my efforts before lying back down and releasing a long breath through her nose.

This is just my first attempt at dog-laughing. Anybody else have results to report (those who aren’t the sort of people to look askance at using a spare arm as a tail on occasion)?