You are here: Home / Uncategorized / My first audio drama 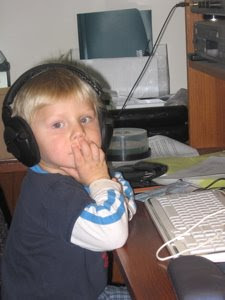 I just finished up the second draft of my first audio drama. It’s been quite the project, and although it’s getting closer to where I want it to be, I know it’s not there yet. But it’s been an incredibly fun project and a good change of pace from the novel, which is on hiatus, but not back-burnered.

Here’s what I’ve learned about writing audio drama so far.

First, here’s one handy link with everything you want to know about audio drama and then some: The Well Tempered Audio Dramatist.

Second, I needed to have a fundamental overview of the story beforehand. In writing prose, it’s easier to just follow the words to see where they lead. For some reason, though, and I can think of several possibilities, I couldn’t just start writing a scene and see what the people said. Maybe it was because I’m not familiar enough with the form and format to stop concentrating on that and follow the story. Maybe it’s just my approach. Maybe it’s this story.

This story started with a challenge from Willamette Radio Workshop to come up with a 15-minute audio drama in some way inspired by the “St. James Infirmary Blues” for a Halloween anthology production. I thought, that sounds like fun. Too bad I don’t have any ideas. And then I got the idea, and that song ran through my head for a few days until I got the bones of the story. Then it disappeared.

And the story — well, we’ll see what comes of the story.

The third thing I learned is that you use sounds to reinforce mood. Well, duh, you say. You’re writing audio drama. But my approach was to start with dialogue — which I suppose is as good a place as any. But when a perceptive critiquer pointed out a two-word phrase that summarized each scene, it gave me the ambient mood of each scene, and then I knew what might happen to build that mood aside from the dialogue.

So happy, victorious, on-top-of-the-world (and the whole play is set in a bar over a period of several weeks) is a baseball game with the home team winning in the bottom of the ninth. And the music I listened to as I wrote the scenes becomes suggestions for the kind of music backing them in the production. Oddly, St. James Infirmary Blues wasn’t one of them, but mostly Duke Ellington with a little bit of Django Reinhold and Thelonious Monk/John Coltrane thrown in.

Basic, yeah. But it’s a start.